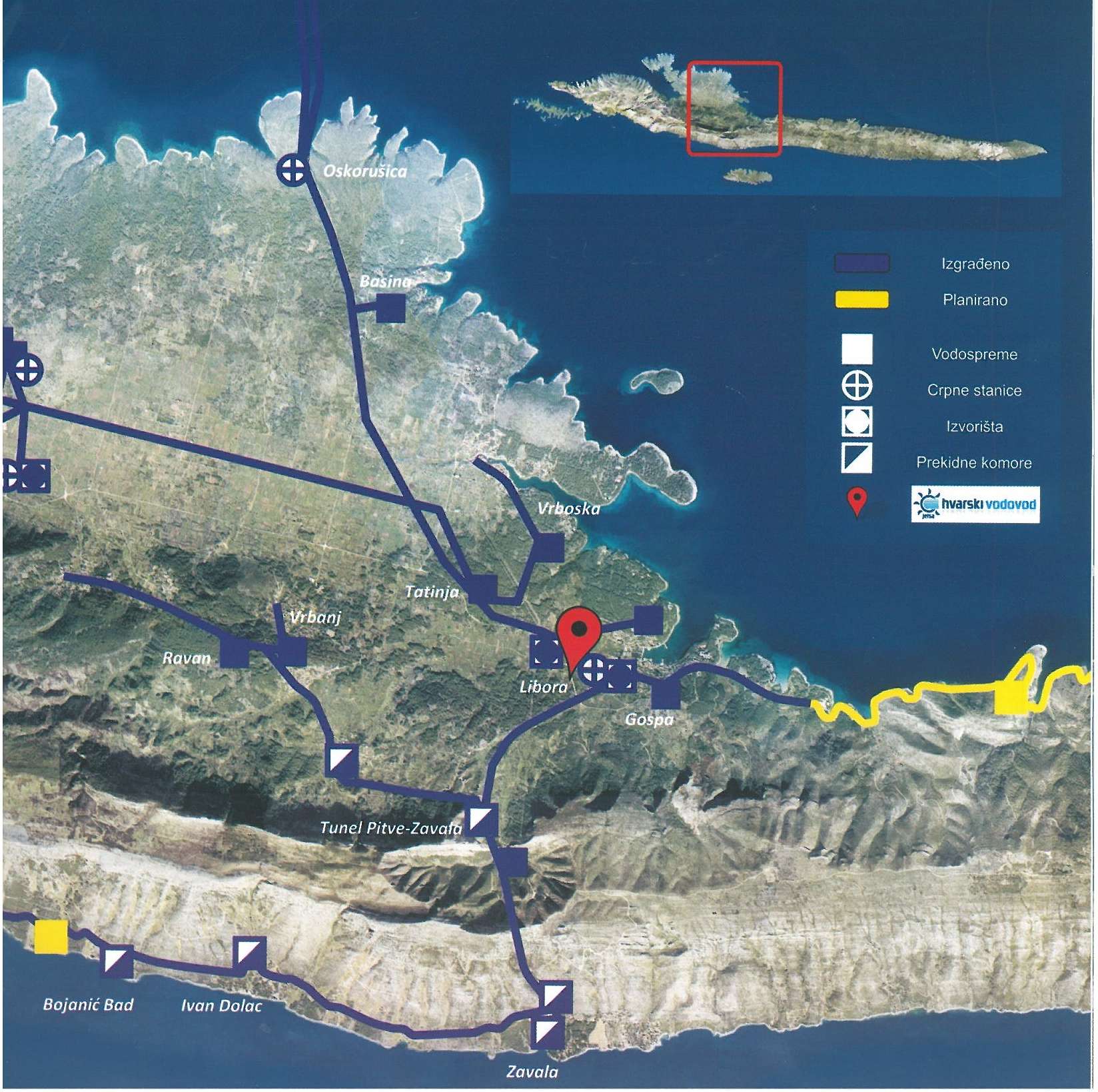 In the central water reservoir of the island of Hvar - "Tatinja" comes water from the river Cetina, which mixes with water from the source in Jelsa - pumping station "Libora" (average yield of about 40 l / s). In Jelsa there is also a spring "Vir" (approx. 6 l / s) which is used occasionally during the summer period. On the road from Oskorušica to Tatinja, there is a branch for the "Basina" water reservoir, which supplies the settlement of Basina. From the main reservoir "Tatinja" water is supplied through the local reservoirs "Gospa" and "Burkovo" to the town of Jelsa, and through the reservoir "Vrboska" the town of Vrboska is supplied.

During 1965, the catchment and pumping station "Libora" was built, which was renovated in 2002, and a modern pumping station "Libora" was built, which has two functions: one is pumping water from the catchment in the reservoir "Tatinja" where is mixed with water from the Cetina, and the other is the pumping of such mixed water from "Tatinja" into the water reservoir "Pitve - Zavala". Namely, until 2002, water was pumped directly from the Jelsa catchment to the "Tunel" reservoir, which supplies the towns of Pitve, Vrisnik, Svirče, Vrbanj and Dol from the north, and Zavala, Ivan Dolac and Sv. Sunday on the south side of the island. As the abundance of the "Libor" spring was of limited capacity, in the peak tourist seasons, water of increased salinity often came to these places. With the new way of water management since 2002, ie mixing water from the Cetina, there is no need to pump "Libora" beyond its capabilities, and since then all settlements in the western part of the island receive water of the same quality.

The first 1,400-meter-long hydraulic tunnel was built in the Vratnik area above Pitava, and two reservoirs were planned. Only one water reservoir was built, and since there is no need for another water reservoir even today, the space was rented to winemaker Zlatan Plenković.

Central part of the island of Hvar

From the northern entrance of the tunnel "Pitve - Zavala", a pipeline was built which leads the water to the water reservoir "Ravan" and the water reservoir "Vrbanj". This system is maintained and today it supplies all places in the central part of the island of Hvar: Pitve, Vrisnik, Svirče, Vrbanj and Dol. 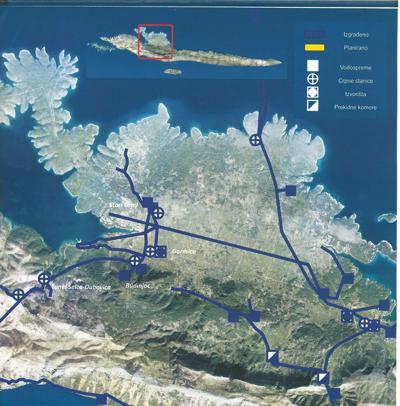 In the past, the town of Stari Grad was supplied with water from the pumping station "Vorba", through the old water reservoir "Stari Grad". In 1984, the "Garmica" pumping station was built, with a capacity of approx. 15 l / s, which is used today during the summer months.

The city of Hvar

Water came to Hvar in 1964 through the southern pipeline (200 mm profile) from the "Tunel" reservoir (overflow elevation 207 m above sea level) to the "Hvar" interruption chamber (overflow elevation 91.2 m above sea level), and from there to the "Hvar" reservoir 1 "," Hvar 2 "and" Hvar 3 "with a total volume of 4450 m3, built in the Austro-Hungarian era. After breaking through the tunnel "Selca - Dubovica", a pipe of larger capacity (partly 350 and partly 300 mm) supplies the settlement of Milna and the town of Hvar. After the reconstruction of Hvar's reservoirs in 2003, new materials such as PEHD pipes and INOX pipes are used instead of the old salon and steel ones. So, in the western part of the island of Hvar, all populated places are supplied with water. As far as Mali Grablje is concerned, there are no permanent residents there for now, but it is planned that the supply through the settlement of Velo Grablje will be resolved in the near future.

The settlement of Sucuraj has a water supply via a submarine pipeline with a profile of 150 mm and a length of approximately 4 km from the Makarska water supply system, which was also built as the first pipeline from Bol to Oskorušica in 1986. The water arrives by gravity from the "Duba" reservoir to the "Sucuraj" reservoir. It remains to build a water supply system for the eastern part of the island of Hvar, from Poljica to Bogomolje, including the associated inhabited bays. The projects are under construction and the realization of this project is expected with funding from EU funds. The population in the settlements that are not supplied, has been receiving drinking water by tank trucks for ten years, at a price like all other citizens of the island, with the transport being subsidized by the Ministry of Regional Development and EU funds.

Nema rezultata Pogledaj sve rezultate
We use cookies on our website to provide you with the most relevant experience by remembering your settings and revisits. By clicking on "Accept all" you agree to the use of ALL cookies. However, you can visit "Cookie Settings" to give controlled consent.
SettingsAccept all
Manage acceptance

This website uses cookies to enhance your experience as you navigate through the website. Of these, cookies that are categorized as needed are stored on your browser because they are necessary for the basic functionality of the website to work. We also use third-party cookies to help us analyze and understand how you use this website. These cookies will only be stored in your browser with your consent. You also have the option to turn off those cookies. But giving up some of these cookies can affect your browsing experience.
SAVE & ACCEPT